The Open Form node has been extended to support Amazon Lex. This provides Studio tasks a streaming interface to the Lex NLP service. Studio users can select between DialogFlow and Lex NLP services when it comes to building conversational voice applications.

A new customer interaction channel has been added to Studio. Studio users can create Chatbot tasks that can interact with customers via webchat or a mobile app. The Chatbot tasks come with a Conversation node and a Reply message in addition to all the standard background processing nodes.

Studio Cloud-Speech-to-Text and OpenForm nodes have been updated to expose the verbatim audio files of user utterances. You will find a new option to save the utterance as an audio variable. This provides an option to save the audio recordings to a data store and use them for improving the user experience.

A new class of waiters has been added to Studio. Premium waiters augment the standard waiter functionality by providing a mechanism to pass call related information to the agent. For example, you can extract information about the caller/call from the CRM and have it played back to the agent using Text-to-Speech. You can also have the caller record a short message and have that played back to the agent prior to transferring the call. For more information on premium waiters please visit the resource center.

For a tutorial & demo on QforMe Premium Waiters click the video below.

We have improved our Natural Language Understanding functionality by supporting a number of enhancements that were announced by Google last month. The Cloud Speech-to-Text node uses an enhanced phone model when using US English as the recognition language. This model provides upto 40% improvement in transcription accuracy over the default models that were used before. We have also increased the maximum number of phrase hints that can be passed from 500 to 5000. We have also included support for Dialogflow’s auto speech adaptation feature which improves the speech recognition accuracy of your agent.

We have added support to include phrase hints as part of the Open Form node. Phrase hints provide an ability to send a list of phrases with each request that results in improving the speech recognition accuracy. We have also fine tuned the underlying speech platform and improved how we handle barge-in behaviour especially in noisy environments. These changes will improve the overall user experience when using NLP functionality in Studio.

We have also added 59 new voices to Studio. These are a combination of Google Wavenet and Standard voices that cover 12 different languages. These voices will be available as part of the NLP session class within the regional and global Google voice packages.

Studio 6 takes natural language processing to a new level with the addition of the Cloud Speech-to-Text node. This node offers a streaming interface to transcribe user utterances.This means we can do open speech recognition without any delay making the interaction with the virtual agent more natural. This node supports more than 50 languages making our virtual agents multilingual.

We have also integrated with Google Text-to-Speech (TTS) service increasing the number of TTS languages that we support to more that 17 with 100 different voices available. The Google TTS voices also support SSML specification providing the ability to further customize the TTS output and make the virtual agent sound natural.

webRTC has grown in popularity and is supported natively by majority of the browsers today. This integration allows Studio to accept a webRTC call and answer it using a Studio voice task. webRTC extends the reach of Studio to web browsers as a potential endpoint for voice calls.

In this initial release we have restricted webRTC access from within the Studio web portal.

We have also introduced a play task feature that allows you to test your task without the need to map phone numbers to your task. This is helpful for debugging and prototyping call flows.

Make sure you have a microphone set up to allow voice inputs to your call flow. Audio will be played back through your device speakers.

SMS campaigns support the use of SMS short codes. Standard SMS numbers have a limit in terms of the number of SMSs that can be sent per second. Short codes allow you to send SMS messages in bulk at a rate of approximately 100 messages per second. This is ideal for running large list-based campaigns. All campaigns for messaging tasks in Studio 5.3 will automatically include the new speed.

The Form Node has been extended to include support for confusables. If you have a custom form type you will have an option to save the speech recognition results in an array variable. This means if your form type has items that are similar sounding, you can get back all the matching items. Please refer to the resource center to learn how to use this feature.

Studio 5.2 offers Open Speech functionality allowing you to transcribe user utterances and store the transcribed text as variables. We currently supports two speech platforms – Google Cloud and IBM Watson. You simply select the platform of your choice, configure your user prompts and Studio will do the rest!

To complement the open speech capabilities, we have also introduced natural language processing within Studio. You have the option to use the Keyword Finder node or the more advanced Dialogflow node.

The Keyword Finder node makes it easy to match keywords or extract information such as email addresses and account numbers from unstructured text. The Dialogflow node simplifies the process of using the Google Dialogflow service by offering a visual interface to access your Dialogflow agents. 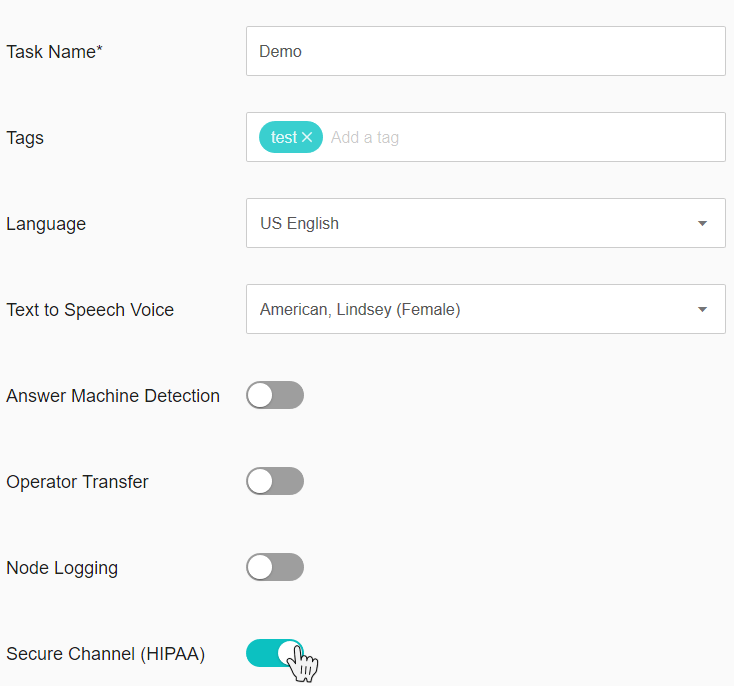 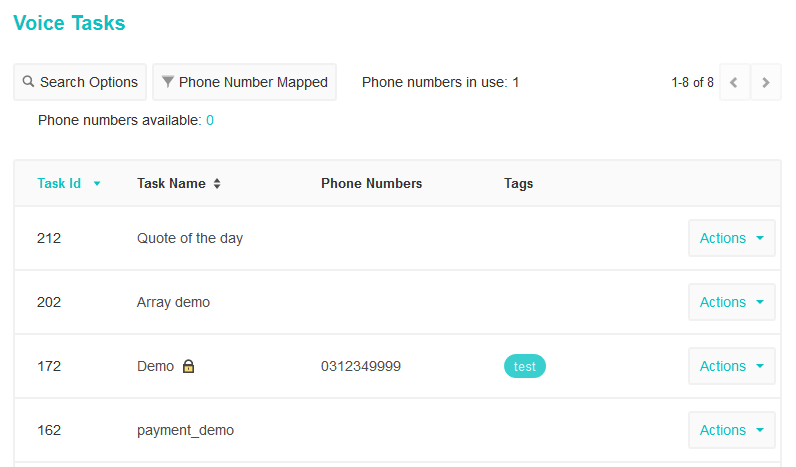 The phone number controller within Studio has been extended to support bulk mapping and un-mapping of phone numbers. This feature is also supported via Studio APIs. 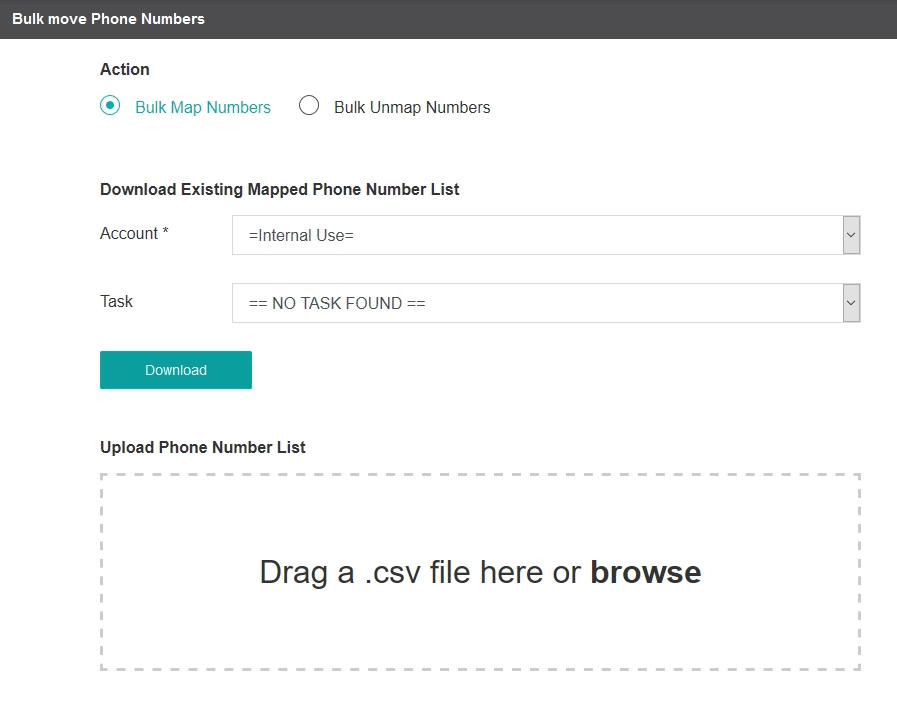 Any time you create a new script Studio will walk you through the four main ways you can create a call flow.

When creating a new script you have the option to choose a ready-made script from the Studio App Library. These apps can serve as a great starting place for your final script and bring a lot of functionality 'out-of-the-box.'

You can now save scripts as different versions and restore to any previously saved version. This provides security when updating scripts with new enhancements or testing changes to your call flow.

Studio templates are now available via the app library. When you create a new script and select the app library option, you will be provided with all the pre-built templates that you have access to. Apart from a name, templates now have an icon and an optional short description.

We have introduced script versioning in Studio. This feature allows you to save a version of a script at any point in time and roll back to a previously saved version of the script.

We have added the ability to transcribe recorded audio. Any recorded audio file that has been stored in Studio can be transcribed. Please note that this is a paid feature. Learn more.

We have completely re-designed the call flow editor with a drag and drop interface. The interface makes it easy to create and edit scripts. We have grouped all the nodes into different categories based on their functionality making it easy to find relevant nodes when building scripts. We have also introduced a new concept called Quick Nodes that provides quick access to your favourite nodes making it easy to build scripts.

Service Providers can setup a custom login page to access Inference Portal. This feature allows them to customise the login page with their logo and select a sub-domain of their choice. The feature can be configured by logging into Studio portal and updating your profile. Refer to the resource centre to learn more about this feature.

We have extended our SMS channel to support conversation mode. Using this feature, you can build SMS apps that can have a conversation with your end users. If a user responds within a pre-defined time, conversation mode provides the ability to continue the conversation and ask follow up questions or perform a different action. To learn more about conversation mode, follow the how-to guide in the resource centre.

The Node logging feature provides the ability to log call data without the need for a Log node. Once you enable Node logging on any script, Studio will log information about each call as it traverses through the different nodes and send that information to an external data warehouse (currently Google firebase in supported). Please note this feature is in beta and only a limited set of nodes are supported in this release. Refer to the resource centre for more information on how to use this feature, the supported nodes and the information logged.

Starting from Studio 5, workflows will be charged using Inference credits. If you are using workflows in your applications, please contact your service provider or Inference to purchase credits. A workflow reporting section has been added to access reports on your workflow usage.

We have introduced a new channel in Studio - SMS! You can create scripts that can be triggered by SMS messages and control the behaviour of your script using a variety of Studio nodes. SMS scripts will have access to all the standard background processing nodes such as Table Lookup, Integration, and Datastore. In addition, we have added two new nodes - Send SMS and Reply so that you can send an SMS to a third-party and respond back to the sender via a text message. Studio’s Connect module has been updated to support outbound SMS campaigns.

List-based campaigns can now be controlled via APIs. Using APIs you can now start and stop a campaign; upload phone numbers and passed parameters; and change the campaign schedule and after hours action.

QForMe application has been revamped and integrated within Studio making it easy to configure the application. You have access to QForMe features via two new nodes: QForMe - Check Waiter and QForMe - AddtoQ.